I was able to tour a part of this resort but for some reason, they would not take me by the spa.  I did wander through the two restaurants and had lunch in one of them. This facility used to be a well known tennis ranch and has gone through several owners. The most recent, a corporation, has focused more on the spa, and including Native American offerings in the motif, spa offerings and guided tours, plus camps, an adult one and one for kids.

It is situated on 70 acres and nestled a midst the red rocks of Sedona, next to the trail head for Boynton Canyon, which houses one of the vortexes.  They have a strong green initiative and plan to include solar at some future time.  The lodging is comfortable and attractive ranging from a Junior suite with a kitchenette to larger 3 bdr. casitas.  The base price for the smallest room starts at $325 per night and includes use of the spa facilities, access to hikes, the fitness facility, cooking classes and other classes and activities including the pools and tennis courts. There is a top notch golf course here as well. The spa has a cafe, there are two restaurants and a pool bar that serves food and drinks, too.  The spa and salon have many various treatments including spiritual, psychic,and energetic treatments,, other holistic offerings and ones with a Native American focus.

The spa is in the planning stages of building large residences that will be situated next to the spa. There are houses on the property that are privately owned and some of them are managed and rented out by the resort. There is a large amount of space offered for business meetings and workshops. 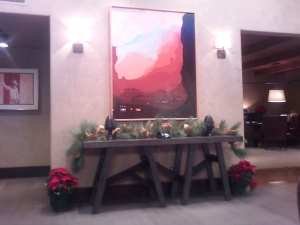 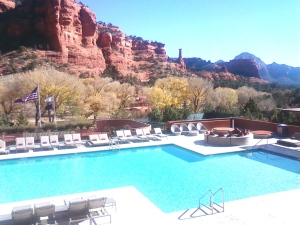